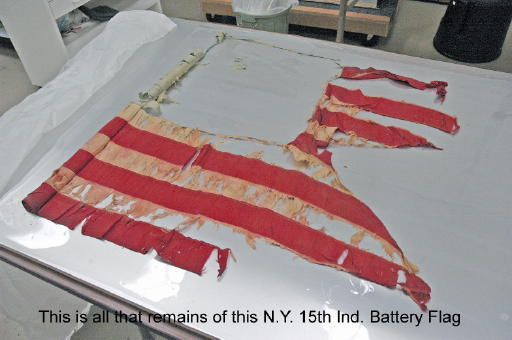 After reading the information presented on the New York State Battle Flag Preservation Project website, I found myself wanting to find out more about what is being done to preserve not only the flags used during the Civil War, but those of other wars that New York units/regiments found themselves embroiled in. My other interest was to get an idea of 'how' these important pieces of history are preserved.

Through the help and cooperation of Christopher Morton, Curator of the N.Y.S. Battle Flag Preservation Project, I was able to tour the facilities where conservation efforts are taking place at the Peebles Island Resource Center in Waterford, N.Y., just north of Albany. In addition to satisfying my curiosity about the project, I explained to Christopher that I would like to be able to take some photographs there and wanted to do an article for this website regarding the project. Inititally, there was some concern about my taking photos and doing a story, but the day before my trip to the conservatory Christopher informed me that he had been able to obtain permission for me to take photos and to do the article. For that, I thank Christopher.

With over 1,700 battle flags, New York State has, if not the largest, one of the largest collections of battle flags in the world, dating from the War of 1812.

Given excellent directions to the Peebles Island Resource Center by Christopher, I arrived and found him waiting for me at the entrance to the facility. After the customary self introductions, he introduced me to Sarah Stevens who would be my guide.

Sarah, the Associate Textile Conservator, was hired a few years ago by the N.Y.S. Office of Parks, Recreation and Historic Preservation, Bureau of Historic Sites department to work full-time on the battle flags. Sarah received her Masters of Science degree in Historic Costume and Textile at the University of Rhode Island. She spent a year on a Mellon Fellowship at the Metropolitan Museum of Art in New York City, and 9 months at the Cooper-Hewitt National Design Museum, also in New York City, prior to coming to the Resource Center in Waterford.

Sarah explained to me that they are not 'restoring' the battle flags at the center, but rather 'conserving' them to slow further deterioration as much as possible.